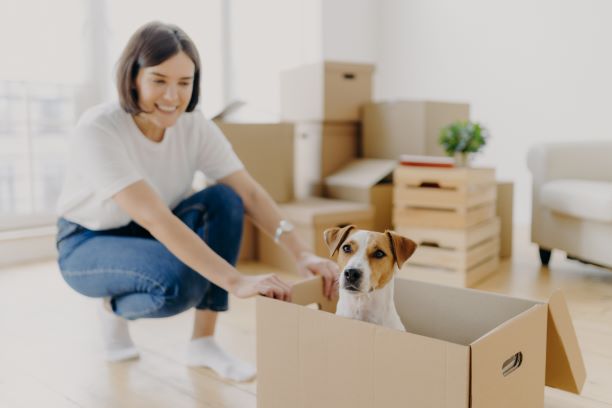 Aside from Brexit and coronavirus legislation, not much else has been working its way through Parliament since March 2020.

So it is, perhaps, a sign of the importance of the pets in lets debate – particularly in light of the various lockdowns, where pets have become so important to many – that the bill to end landlord restrictions on pets in rental properties is making such fast progress.

But what do agents need to know about the proposals included in the Bill?‍

What is going through Parliament?‍

Launched in October by the MP for Romford, Andrew Rosindell, the Dogs and Domestic Animals Accommodation Protection Bill has already passed its First Reading in the House of Commons and is soon to have its Second Reading.

Thereafter follows the committee and report stages and the Third Reading in the Commons, before the Bill heads to the Lords to go through exactly the same process. Then comes the consideration of amendments, before Royal Assent is reached.

As we can see, then, the Bill is still some way off being made law – and parliamentary time remains at a premium because of the coronavirus crisis and the fallout from Brexit – but it does have wide cross-party and public support, which should ensure it has a fast passage through the chambers without much in the way of opposition.

It’s also a much smaller and less complex Bill than something like the Renters’ Reform Bill, which promises to scrap section 21, amongst other things, meaning there is less for lawmakers to analyse.

So, it seems certain the Bill will pass through at some point, but it’s impossible to put a timescale on when exactly this will be. What we do know with much more certainty is what’s included in the Bill.

It proposes to make it a right for tenants to have domestic animals in rental properties with the caveat that they demonstrate responsibility and care for the pet.

Should the Bill pass into law, renters will gain the assumed right to take a pet into their rental property if they are seen as a ‘responsible owner’.

It’s an issue that has long been a bone of contention in the lettings sector, with most landlords preferring not to allow pets in rental properties because of the possible damage and issues caused.

On the upside, allowing pets in rental homes does tend to encourage long-term renting – as it allows people to put down stronger roots – and increases the pool of tenants that landlords can target their home towards, as many renters are animal-lovers who want to keep a pet with them in their home.

As has been proven by the pandemic, there are also mental health benefits to having a pet – for example in helping to stave off loneliness. With social distancing and other restrictions likely to be in play for some time yet, even with the vaccine rollout, protecting people from the ill-effects of isolation is going to be more important than ever.  ‍

What constitutes a ‘responsible owner’?‍

The Bill states that whether a person is a responsible owner or not will be determined by the following checklist:

The move to ban landlords from placing restrictions on domestic animals in rental homes has been on the horizon for a while, and has simply been supercharged by the pandemic and an increase in the number of requests from tenants to keep pets in their homes.

At the beginning of 2020, Housing Secretary Robert Jenrick said he wanted to overhaul the government’s model tenancy agreement to remove pet restrictions. This move was revisited in January 2021, with the government announcing that it had rewritten the standard tenancy contract to include more 'pet-friendly' elements.

Renters with 'well-behaved pets' will be able to secure tenants more easily, with no blanket bans allowed under the government's model tenancy agreement.

The default position of the new agreement will be one of consent and landlords (or agents acting on their behalf) will be required to provide a written rebuttal to a pet request with in 28 days which provides a 'good reason'.

However, landlords are not compelled to use the government’s model agreement, which means it has far much less scope than the Bill currently passing through Parliament.

During the new Bill's First Reading in October 2020, Rosindell – who introduced the proposals to Parliament as a Private Members’ Bill under the Ten Minute Rule -  said tenants who own pets have to face their family being ‘torn apart’ due to most landlords having 'unnecessary bans or restrictions on pet ownership’.

As well as support from other MPs, Rosindell’s Bill has the crucial backing of animal charities such as the RSPCA, the Dogs Trust and the Battersea Dogs and Cats Home.

What are the upsides for landlords?

If your landlords are worried about the proposals, and having their hands forced by the government when it comes to allowing pets in rental properties as standard, you could reassure them with some of the advantages of allowing pets.

It has become crystal clear in recent years, as the private rented sector has expanded and more people are renting (and renting for longer), that the desire for pets in rental homes has grown. The pandemic has further accelerated this as it has forced people to stay at home much more than they normally would, in some cases in single-person households.

According to analysis of more than 700,000 users carried out by Movebubble, searches for homes allowing pets more than doubled between late March and May last year – the height of the first lockdown.

In addition, rental searches for the term ‘pet-friendly’ were up 68% last summer when compared to June 2019.

If your landlords already accept pets in their properties, they could be benefitting from much higher demand if they have a property they need to fill quickly. You may want to encourage your landlords to get ahead of the game, taking a more lenient approach to lets with pets, to take advantage of a much larger pool of tenants.

You could also charge slightly higher rents to offset the risks of letting to tenants with pets. Tenants are likely to be willing to pay a bit more if it means they can bring their beloved animals with them.

While the Tenant Fees Act prevents landlords from charging a higher deposit to cover the associated risks of accepting pets, there is nothing to stop them charging higher rents for the privilege of allowing animals in their properties.

Tenants with pets are also likely to stay put for longer, as they are less keen to want to move around lots and will be eager to remain settled in one place.

It also stands to reason that if a tenant can look after a pet in the correct way, they will look after properties in much the same way, treating it as if it was their own and going the extra mile to ensure any issues with their pets are kept to the minimum. ‍

The reason why most landlords don’t allow pets in rental properties, and why so many are unhappy about the moves being made to prevent them from having a say over it, is the risk of property damage – which is seemingly inevitable, even if it is only minor – from having pets in lets.

Depending on the extent of the damage, substantial sums of money in repairs may be required when a tenancy turns over, which a landlord may not be able to get their tenant to pay for.

As well as damage, noise pollution, bad odours and neighbourly disputes are other possible complications.

A survey by the Tenancy Deposit Scheme revealed that over half of the 1,500 landlords surveyed had experienced damage to their rental properties caused by pets.

Meanwhile, 70% of landlords said they didn’t think tenants should automatically be allowed to keep animals in their rental properties.

Despite this, the momentum behind such a move does seem inevitable. On the upside, it does seem as if tenants will have to go to quite stringent lengths to prove they are responsible owners, and it may be the case that landlords demand some sort of pet or contents insurance before allowing people to rent their home.

The rules, exemptions and regulations won’t be clear until the Bill passes into law, but agents may want to start preparing their landlords now for what is likely to be a much more pet-friendly future.